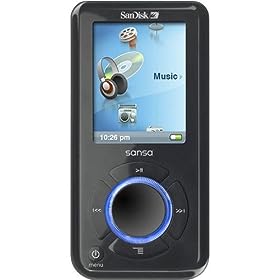 I’m quite pleased with my purchase of a SanDisk Sansa e250 2 GB MP3 player a few months ago. I had several requirements for an MP3 player and this one fit the bill quite nicely. In fact, it was the only one with one-touch voice recording, which is one of the main ways I use it.

Capacity – Minimum of 1GB. 2GB is nicer, but being extensible is even better.

Durability – Flash drive is nice because you don’t have to worry about running with it. More likely to last for a good long while.

Battery – I wanted to get a player with a replaceable battery and that had a long life.

Extras – A carrying case, headphones and such are nice to have.

I was at 01.01.11A and upgraded to 01.02.12A. I couldn’t upgrade using Linux though. They force you to use their firmware updater which only runs on Windows. When I got on a Windows machine and ran the utility, it displayed an error dialog that said, “There is no internet connection. Fix the problem and try again.” I had an internet connection, so the error was incorrect and utterly useless.

I’m not the only one who wanted the firmware files instead of having to run the utility. This guy was running Vista and had to do acrobatics to upgrade his firmware. In case you have the problem he ran into (you try running the updater but it says it has to be run by the service, run SansaUpdater.exe -iloveit.

After searching around the anythingbutipod.com forum, I found the actual firmware files (you can use 7-Zip to extract RAR files). There are two files you need to update: an MI4 file and a ROM file. In the end I didn’t use the updater. I don’t know why SanDisk doesn’t make the files available in addition to letting people use the updater, especially when some people don’t have access to Windows. In any case, here are the files you need:

I looked around for instructions for the upgrade and someone in the forum said they turned it off, then turned it on while holding the record button, but I just copied the two files to the main directory of the player, then disconnected and it upgraded the firmware without any problems.

I did get a response from Sansa regarding my question about Linux support stating that the player is only officially supported by Windows XP, but they sent me the firmware files with instructions on how to upgrade.

The firmware upgrade seemed to fix the first problem I had, which was when listening to voice recordings and it blanked out, it would come back and continue playing the voice recordings when I hit a button it acted like it was playing an MP3, scrolling the title and everything. The second problem was that it showed plenty of battery life left, but in the morning when I turned it on, it turned right off again saying the battery was too low. Another thing that would be really nice to include with firmware updates is a list of fixes.

When you are listening to an MP3 and hit the option button to make it loop or something, there’s no way to return to the playing menu. It goes back there eventually, but it would be nice to have a way to return immediately.

What is the hold button? I had no idea at first, but after my battery started dying every few days, I found that if I turned the hold button on the battery lasted far longer – like several weeks. The hold button keeps your Sansa from turning on.

Playlist management was a bit rough, but following the instructions at this forum helped.

It takes 15 seconds to turn on, so when I’m in the car and I want to record something, I have to wait 15 seconds until I can record it. The shorter it takes to turn on the better.

There’s a great review with lots of pictures at anythingbutipod.com, and I learned that this MP3 player is affectionately called the Li’l Monster by Sansa.

I’m very happy with this device overall. It fits my needs quite well, and even came with some extra features like being able to play movies and hold pictures. It can even play slideshows with your favorite MP3 playing in the background. I haven’t used it much for those purposes, but it’s nice to know they’re available if I ever want to take advantage of them. For the price, capacity and features, this is the best MP3 player out there right now.