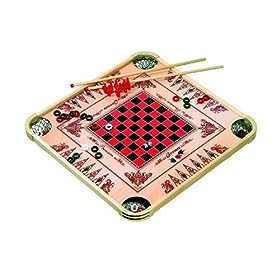 Has anyone heard of the game Carrom? I was reminded of it by the April 13th word of the day (Yes, that’s from 2004. This is one of my…ahem…really, really old drafts) and went online to see if it was well known or just a fart in the wind sort of game. Our family got it as a gift from someone and I don’t think we played by all the rules, but it was fun. I haven’t played it in ages nor have I seen it around.

Come to think of it, I haven’t seen Hungry Hungry Hippos in a long time either. I had all but forgotten about those white marbles and the joyous sound of those plastic hippo mouths opening and closing. Now I want to play it again, even though it probably wasn’t all that great (confirmed by the 113 reviews that give it a 3/5 stars). Now I remember how fun it was as a kid and want to play it again to quench my nostalgic appetite. Commercials for the game made it seem like those kids enjoyed that game more than anything else on the planet and as a kid, I believed them.

You can buy Carrom and Hungry Hungry Hippos at Amazon. Maybe I should add them to my wish list.

When I do good, I feel good; when I do bad, I feel bad, and that is my religion. -- Abraham Lincoln
(See all the quotes)