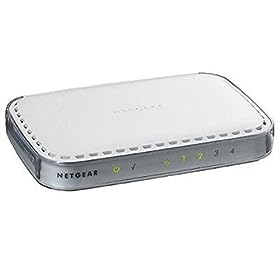 Here’s another review that I posted at Epinions, this time of the Netgear RP614 v2 router. So far I’ve only had one problem; port 2 stopped working. Their customer support has been really busy (in fact I got a busy signal a few times) so I haven’t been able to talk to anyone yet, but thankfully I only have two machines on the router so there’s no rush. I want to get a replacement at some point so I’ll keep calling until I get to talk to someone, but other than that I’m still very pleased.

The Bottom Line: It’s a great router at a great price with a 3 year warranty.

I use Comcast broadband with two computers and got a letter from them saying I was only allowed to use one IP address, so my main reason for buying the RP614v2 router was to be able to have multiple computers behind the firewall and only use a single IP address. I also wanted to have the added security since the computers would no longer easily accessible from the internet.

I spent quite a bit of time researching routers including the LinkSys BEFSR41 the D-Link DI-604 and this one. The reason I went with this one was almost entirely because of the three year warranty. The other two only have a 1 year warranty and from what I read, a year seemed to be long enough for several routers to stop working. The reviews on all three were varied. Some would say how great the router was, while others compared it to dog turd. In the end they all averaged out, leaving me no farther along than when I began.

I borrowed a spare DLink 804HV from work so I would have a router until mine arrived, and it worked great. The web interface was easy to use and I liked the logging feature. I would have bought it from them if I hadn’t already ordered the Netgear.

I don’t like the fact that it has a session timeout so my SSH connections are killed after a certain amount of time (it seems to be pretty short, like 30 minutes). There is no way to change that value in the latest version of the firmware (I’m using Version 5.20 Release Candidate RC3) so I hope they add that in later revisions.

It’s quiet, doesn’t take up much space and does exactly what I wanted it to do. I haven’t had to deal with customer support (and I hope I never have to) so I don’t know if that’s a negative, but as long as it keeps working, I’ll be happy.

You can find updates for the firmware at kbserver.netgear.com.

Money is a good servant but a bad master.
(See all the quotes)