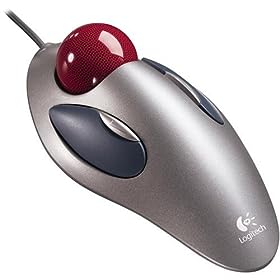 Here’s a review I wrote for Epinions on the Logitech Marble Mouse, which I bought a few months ago. I’m using it as I write this entry and it still works great.

Simple, yet functional and built to last
Aug 03 ’04

The Bottom Line: It’s a comfortable, ambidextrous mouse that will last for years.

I started having some pain in my wrist because of the movement of the mouse, so I decided to buy a trackball. I found mine on Overstock.com and soon after I got it my wrist pain went away.

I love the fact that it’s optical and doesn’t need a mouse pad or very much room. It’s very functional in that regard. It also fits well into my hand so it’s comfortable for spending several hours a day at the computer. I frequently use it for 3-4 hours at a time when I’m programming and it’s fine.

It works equally well for both right and left-handed people. I currently use mine left-handed.

I’ve found that after several weeks of use a small collection of dust will appear on the wheel, as if it’s cleaning itself. All I have to do is remove the little chunk of dust from the ball and it keeps on working.

You can pull the ball out very easily for cleaning if you want to, but there’s really no need, unlike a normal mouse (not optical) which has to be cleaned every so often to get the grit and dirt off the wheels.

Now that I’ve covered what I like, here’s what I don’t like. There are only two buttons, so I miss being able to easily scroll up and down on web pages and using the middle button to paste text. In Windows you can set the double click to do different things like paste or scroll, but it’s not the same as having a three-button mouse. If they added a scroll wheel I would be pleased as punch.

Another thing I’ve found is that it’s a little hard to click both of the buttons at the same time, and since that’s what I do in Linux for pasting text, that can be a slight nuisance initially, but I’ve gotten used to it.

It works fine in Windows and Linux as a regular old PS/2 mouse. I emulate three buttons in Linux in the XF86Config file.

Living is more a question of what one spends than what one makes. -- Marcel Duchamp
(See all the quotes)