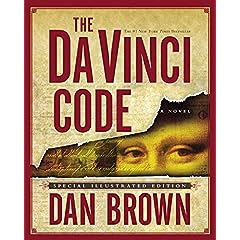 I finished reading Dan Brown‘s The Da Vinci Code over the weekend. It was hard to put down once I got into it.

Dan Brown’s photo looked strangely familiar, so I read his biography and found that he attended and later taught English at Phillips Exeter Academy. I lived about 5 minutes walking distance from the academy and worked there for a summer. He also lived in Spain for a year and I lived there for two, so while slight, there’s a chance that at one time or another, our paths crossed.

Anyway, I became curious about the many facts raised in the book and began researching them. Here are the links that were most helpful in solidifying my understanding of the various organizations, places, pieces of art and ideas he presented.

The book has caused a great deal of controversy regarding Jesus’ marital status, his life and the early history of the Catholic church. These links discuss many of those issues.

If you haven’t read the book yet, here’s a teaser to get you hooked. It’s the type of book that you start and can’t put down until you finish. Oh, and Ron Howard is making it into a movie.

Laughing helps. It's like jogging on the inside.
(See all the quotes)