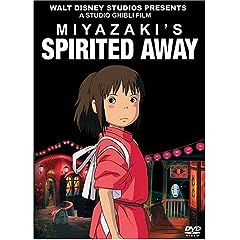 Spirited Away accurately describes the experience of the viewer as well as that of the little girl who learns courage and love. I was engrossed from start to finish by the story, masterful animation and music. The artists showed an unbelievable attention to detail and created majestic scenery as a backdrop for the story. It’s quirky, but appeals to the imagination and in a world of spirits, anything can happen. Miyazaki takes some liberties, resulting in a hybrid of Alice in Wonderland and The Neverending Story, but that description really doesn’t do it justice.

For more information, take a look at the official site, the trailer and a review.

Whatever we plant in our subconscious mind and nourish with repetition and emotion will one day become a reality.
(See all the quotes)