Changing Motherboard from RAID to AHCI with Windows 7

I don’t even remember making this decision, but I recently discovered my motherboard’s storage controller was set to RAID for my SSD and spindle hard drive. I was trying to see how much life was left on my SSD after seeing a friendly reminder on Reddit. But SSDLife couldn’t see either drive. They were hidden behind a RAID configuration I didn’t even want.

When I switched from RAID to AHCI in the BIOS, Windows 7 wouldn’t boot. Fortunately, changing it back to RAID fixed that.

If you can believe it, I fixed the not-booting issue with two lines. They were registry edits I found on Microsoft’s answers site.

I’ve heard people claim commands like these are magic. I know better than to make that claim myself, but I have to admit, going from not booting to a fully working system without RAID enabled felt magic. I love it when a plan comes together.

It could be my imagination, but even after a day of having switched over to AHCI, the SSD and the spindle drive both feel much snappier. I didn’t run any benchmarks, but everything on my system feels lighter and faster. I like it.

And the good news is, at least according to SSDLife, my SSD has another 8 years left (taken with a large grain of salt of course). 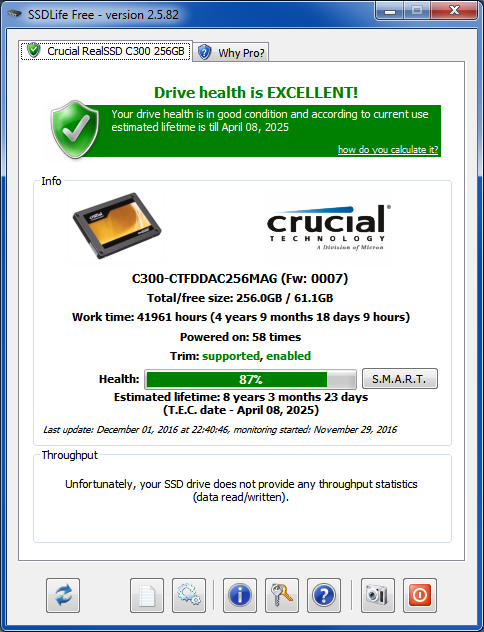 I was surprised to see it’s only been powered on 58 times in 5 years. That’s probably due to monthly Windows updates reboots. Windows reliability has come a long way.