How I Saved Over $1,000/year With EmailOctopus 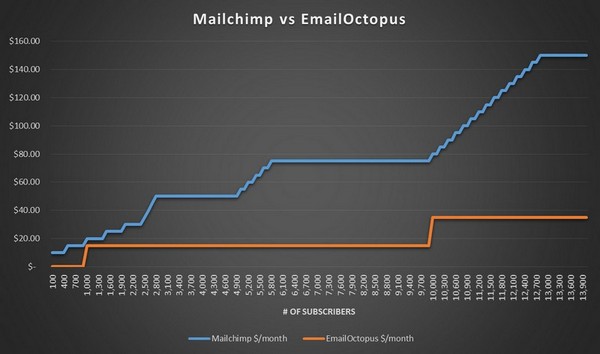 I’ve been using MailChimp for my Riddles and Brain Teasers site for the past five years. When I first started, it was free. Then it bumped up and leveled out at $50/month. I was okay with that.

The price began another ascent when the list reached 5,000 subscribers. It leveled off at $75/month and I was somewhat okay with that.

In the past few months I’ve been going up the third staircase. It’s longer and steeper than the first two and it’s painful. Every 200 subscribers adds $5/month, and I was heading for $150/month. Halfway up the staircase, I was no longer okay with it. I couldn’t justify paying $150/month to send out a monthly newsletter.

So I began my search through nearly a dozen alternatives, and last month my search ended at EmailOctopus, which uses Amazon SES behind the scenes. I will be paying $35/month until I reach 100,000 subscribers. That would have cost me $500/month with Mailchimp.

If anyone from Mailchimp comes across this, my suggestion would be to stop the $5 bump for every 200 subscribers. It’s frustrating and feels unfair when you’ve been adding thousands of subscribers and remained at the same price. I felt like I was being punished every time I bumped up a step. The 10% discount for enabling two-factor authentication was appreciated, but not enough.

Instead, keep it simple:

Now that I have a successful campaign under my belt, I am pleased to report that my first campaign with EmailOctopus had similar click and open rates as Mailchimp (even higher on open rates). The higher open rate could have been due to the new email template I used, but at least I know deliverability isn’t suffering with Amazon SES.

The migration was painless. I exported the list from Mailchimp, imported it into EmailOctopus and requested Amazon increase my sending limit, which they did in a matter of hours. It was also simple to enable DKIM on the domain in Amazon SES.

EmailOctopus doesn’t have as many features as Mailchimp, but they have the essentials that I use, like autoresponders, scheduled campaigns, subscription forms, unsubscribe support and campaign analytics. Plus they’re adding new features. Since I created my account they’ve added email templates and two-factor authentication. Their customer support has also been responsive and helpful.

And I love the price!

In this life we get nothing save by effort.
(See all the quotes)