Eight year old Rachel Beckwith was aghast when she learned that other children had no clean water and chose to skip her ninth birthday party, asking her friends to instead donate $9 to mycharity:water for water projects in Africa. 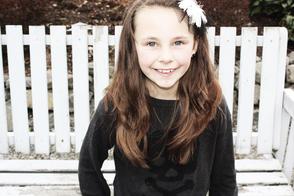 On July 20th Rachel was critically injured in a 13-car pileup. She passed away three days later.

Her campaign goal of $300 must have seemed quite large to her, but now it seems so small. At the time of this writing, her campaign has raised $1,256,304. If you can, please join me in supporting the cause of a selfless 9-year-old girl.

Never knock on Death's door, ring the doorbell and run. He hates that.
(See all the quotes)