With the recent release of Safari 4 Beta, there are 4 viable browser options for Windows users. I don’t consider Internet Explorer a good option (measured by security, speed, user friendliness and adherence to web standards) but one could argue there are 5. I’ve heard murmurs that IE 8 is a big improvement, but I’ll reserve commentary until I’ve used it.

I remain a loyal Firefox user because of all the useful extensions, but I keep Chrome and Opera in my back pocket. I use IE as infrequently as I can, which is basically only when the site requires nothing other than IE to function properly.

Safari is fairly new to me but it looks promising. They’ve imitated Chrome’s look but added a few nuggets of their own. I disliked a few things right off the bat. One of the main issues is they bundle Quicktime with the install. There is no good reason for this. There is a good reason to uninstall Quicktime and replace it with Quicktime alternative. My first order of business was to do just that. I also made sure to uncheck Bonjour and Apple update during the install. Just give me the browser without any cruft please.

Speaking of updates, more apps should work like Firefox. It checks for updates periodically when it’s running. If an update is available, it asks if you want to update, you say yes and you’re done. Opera is second best in this category. It checks for updates but when it finds one you have to download the update yourself and exit Opera to install it. But both checks are lightweight and infrequent enough that you don’t even notice them. They stay out of your way. Apple and Google’s updates go out of their way to install separate services just to check for the version, even when you’re not running the program. That is naughty. Enough said.

Here are the results of Sunspider, a Javascript benchmark, for each of the browsers.

I tested with whatever versions I had on my machine. This is by no means a rigorous scientific evaluation, but it doesn’t take a genius to see that IE is woefully behind. Chrome is ahead by a nose with Firefox 3.1 hot on its tail. The other three are neck and neck. 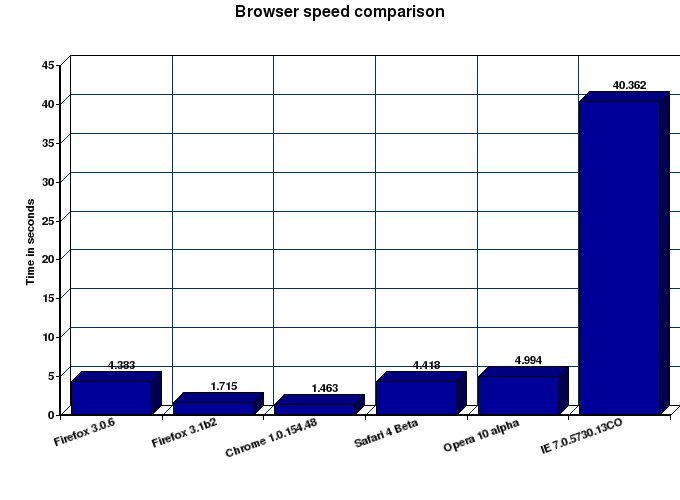 Stealing a rhinoceros should not be attempted lightly.
(See all the quotes)