Have you ever solved a Rubik’s cube?

The day before yesterday I solved the Rubik’s cube for the first time. I know, I missed the craze by a few decades, but I’m sure there are others who never took the time to work out the solution and I wanted to share my take on it.

First off, the terminology can take a while to learn, and it varies quite a bit from solution to solution. The solution I used was easy to follow because they had icons for the moves instead of letters with and without apostrophes (the apostrophe means to rotate counterclockwise). Having a graphic representation of what I was supposed to do helped considerably. 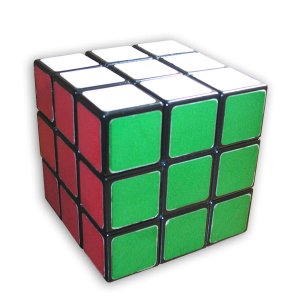 Second, there are as many solutions as there are fleas on a camel – everyone has a different solution. Some are faster but harder to memorize, others are slower and slightly less difficult to memorize. Just pick one and try it out. If it doesn’t work for you, there are plenty to choose from.

Third, it takes time. I thought I would be able to solve it in an hour or so by going through the steps of the solution. I expected it to be like answering questions on a test with the key, but it was quite a bit harder than that. In some cases I accidentally missed a move, resulting in a mixed up cube and forcing me to start over. In other cases the configuration on the cube didn’t match what it was supposed to be according to the solution, so I had to make a guess on what to do from there. In short, I spent a lot of time using trial and error to figure out the solution instead of just following the steps like clockwork. One of the aha moments was when I realized that having one of the cubies in the right spot just meant it was in the right location, not that the colors on the cubie were lined up correctly in the right orientation. This could have been made clearer in the solution.

Fourth, it takes a lot of memorization to be able to solve a Rubik’s cube on your own. It was going to take a lot of time to memorize all the steps of the solution so I decided not to continue. It was interesting to learn some of the theory behind solving it, and I was even learned to derive some of the simpler moves without having to memorize them, but it was going to take more time than I was willing to spend on it.

In summary, it was fun but time consuming, and I gained more respect for those who had the time and determination to figure out how to do it on their own. As I suspected, the real Christopher Gardner never solved the Rubik’s cube to impress a potential employer, as was portrayed in The Pursuit of Happyness. Will Smith has been fascinated by Rubik’s cubes and came up with that idea for the movie.

If the aborigine drafted an IQ test, all of Western civilization would flunk it. -- Stanley Garn
(See all the quotes)