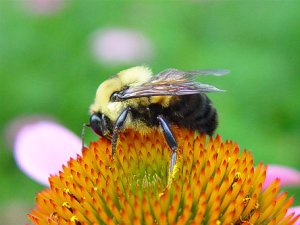 Bees are very interesting and important creatures. For instance, if all the bees died, there would be no more plant life as we know it. Bees have to pollinate plants in order for them to reproduce. That’s why we have the phrase “busy as a bee.” They’ve got a lot to do.

Some have claimed that according to the laws of aerodynamics, bees can’t fly but they do it anyway. It’s often used as a motivational story to incite people to do things regardless of what others around them say. It’s still good advice, but the part about the bees is nonsense. Cecil Adams explains.

The basic principles of bumblebee flight, and insect flight generally, have been pretty well understood for many years. Somehow, though, the idea that bees “violate aerodynamic theory” got embedded in folklore.
According to an account at www.iop.org/Physics/News/0012i.1, the story was initially circulated in German technical universities in the 1930s. Supposedly during dinner a biologist asked an aerodynamics expert about insect flight. The aerodynamicist did a few calculations and found that, according to the accepted theory of the day, bumblebees didn’t generate enough lift to fly. The biologist, delighted to have a chance to show up those arrogant SOBs in the hard sciences, promptly spread the story far and wide.

Once he sobered up, however, the aerodynamicist surely realized what the problem was–a faulty analogy between bees and conventional fixed-wing aircraft. Bees’ wings are small relative to their bodies. If an airplane were built the same way, it’d never get off the ground. But bees aren’t like airplanes, they’re like helicopters. Their wings work on the same principle as helicopter blades–to be precise, “reverse-pitch semirotary helicopter blades,” to quote one authority. A moving airfoil, whether it’s a helicopter blade or a bee wing, generates a lot more lift than a stationary one.

The real challenge with bees wasn’t figuring out the aerodynamics but the mechanics: specifically, how bees can move their wings so fast–roughly 200 beats per second, which is 10 or 20 times the firing rate of the nervous system. The trick apparently is that the bee’s wing muscles (thorax muscles, actually) don’t expand and contract so much as vibrate, like a rubber band. A nerve impulse comes along and twangs the muscle, much as you might pluck a guitar string, and it vibrates the wing up and down a few times until the next impulse comes along. Cecil is sliding over a few subtleties here, but nobody ever said science for the masses was pretty.

Other sources of information on the process of deciphering bee flight can be found at physorg.com and jimloy.com.

Any intelligent fool can make things bigger, more complex, and more violent. It takes a touch of genius, and a lot of courage, to move in the opposite direction. -- Albert Einstein
(See all the quotes)