On a Windows XP machine that has never been connected to the internet, the error dialog below was displayed. It has a modem to dial in to a centralized server to transfer data, but I don’t see how any other nefarious machines could contact it while that’s happening. In any case, the dialog appeared while the upload was taking place, so I’m inclined to believe there’s a correlation. 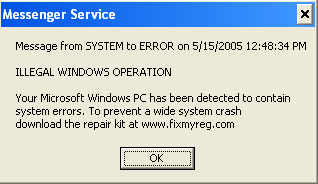 It’s clearly a bogus error message, (to prevent a wide system crash as opposed to a narrow one?) but to the uninitiated, it could be quite believable. I’d like to figure out how it appeared and how to stop it from appearing. As I’m writing this, I realized that I haven’t turned off the Windows Messaging Service, which may solve the problem. Next time I’m on the computer I’ll check it out, but I was curious to find out if anyone else has seen a similar error message. My guess would be that it’s somehow tied to the web site that’s mentioned (fixmyreg.com) because they could get quite a few visitors from it, but I wasn’t able to find any mention of their site on Google.

There is no such thing as "solution" if "problem" is nonexistent.
(See all the quotes)