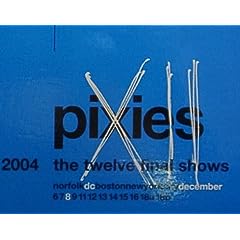 I’m not a big fan of the The Pixies. In fact, I’d never listened to them before last week, when I got a free, out of the blue, unsolicited two-CD set of a live Pixies concert in New York City, in the mail. I have no idea why it was sent to me, but if someone sends me free music, the least I can do is listen to it.

I’m still not a fan of the Pixies.

I began listening to the CDs last Saturday and soon decided I didn’t like their music. I was waiting at a red light at the time of my decision, and a car to the left of me with its windows open held two teenagers listening to some music. I thought about tossing the case into their open window and yelling, “Have some free music!” but one, I didn’t want to miss the open window and have to get out of my car to retrieve the CDs in moving traffic, and two, it occurred to me that I might be able to sell them.

According to pixiesdiscs.com, only 1,000 of these CDs were made. I also noticed that they have what appears to be an official blog for the pixies (there’s a link from the pixiediscs site) and since we bloggers should stick together, I’ll make an offer.

I don’t know if the CDs were sent intentionally to get me to review the CD (or just as a gift) or if it was sent by accident. If the folks running the blog read this blog entry within the next week or so and contact me, I’ll gladly ship them to whomever they were intended or back to you, (at your expense).

Do I hear one doll-ah?