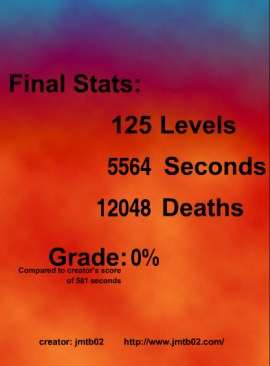 I spent far more time than I should have playing Flash Ball Revamped (Metaphysik), and I concur with Andy; it is one of the most addictive flash games I’ve played.

It took a while, but I completed all 125 levels. At times I became so enraged that I sputtered unintelligible gibberish, left the computer and did something else for a while to cool down, but I persisted. Since the time keeps on ticking and the ball keeps on dying when you stop playing, and there’s no way to save the level and return later, my total time and number of deaths were outrageous, as you can see, but at least I finished.

It rudely gave me a score of 0%. If there had been a way to save your spot and return later, I’m sure I would have done marginally better.

If you become frustrated while playing this game, whatever you do, don’t watch this video of a guy who completes all 125 levels in 346 seconds (a little less than 6 minutes). He completes levels that took me dozens of attempts with such ease, it’s as if a trained slug could do them. It’s truly humbling.

I can only take comfort in the fact that he either sold his soul to the devil or has a one heck of a case of carpal tunnel from all the practicing he must have done.

The creator of the game, John Cooney, just won a multimedia contest, and I can’t say I’m surprised after seeing all the animations he has created. He looks pretty young to me, which makes the amount of work he’s done all the more impressive.

Everybody is somebody else's weirdo.
(See all the quotes)