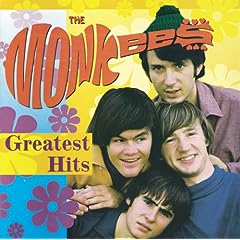 I was listening to Daydream Believer (or Beleeevah) on the The Monkees’ Greatest Hits album but couldn’t understand the dialog before the song starts. Google revealed a raging debate on the subject and naturally I had to listen to it over and over again in order to form my own theory.

Listen to it here

I’m still not sure about the words in italics. It sounds like a word starting with “n” like “not”, but I’ve listened to it over 50 times now and still can’t figure it out. There are a few other versions but none of them seem to fit.

During the search I found allexperts.com, a free question answering service. I submitted my question to the Monkees category and anxiously await a reply. Can you believe there were 20 Monkees experts? Most of the other categories I checked only had three or four, though The Simpsons had an impressive showing of 55. It appears to be a prime resource for answering obscure questions regarding anything from pulling your eyebrows and eyelashes to duct tape. I looked for a Honda repair expert for Carly but only found a lone expert who asks how to adjust the headlights on a 2000 Honda Civic LX. I think he inadvertently signed up as an expert when trying to post his question. He was a mechanic for 16 years though, so he might be able to help.

Well, that was more of a tangent than I had planned. Back to the Monkees. Here’s the meaning of the song and here is a bit of trivia: Mike Nesmith’s mother (Mike was a member of the Monkees) invented liquid paper.

An eyebrow-pulling expert? What the…?

Be like a duck. Calm on the surface, but always paddling like the dickens underneath.
(See all the quotes)