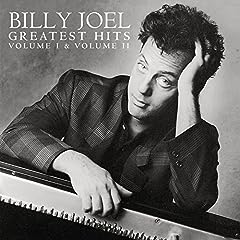 A musical based on Billy Joel‘s songs is on Broadway and as part of the publicity for the show, Katie Couric interviewed Joel. The interview reveals a glimpse of what he’s like as a normal person. I often wonder what people are really like, as opposed to what you see in movies or events where they’re trying to look good for the camera. I’d like to know who they are when they kick back with friends, shooting the breeze. For instance, I learned that when Joel is hungry during a performance he’ll think about what he could eat after the show.

And sometimes during a song like “Just the Way You Are,” my mind will wander. And I’ll think, ‘I wonder what’s on the room service menu in the hotel.’ ‘Don’t go changing to try and please me. Never let me down before.’ (Maybe a, I don’t know, a burger?) ‘Don’t imagine you’re too familiar.’ (No, it’ll be cold and congealed by the time it gets to the room.) ‘If I don’t see you anymore.’ (And the fries will be flat and dried out.) ‘Could not leave you in times of trouble.'”

That’s the type of stuff I love to learn about celebrities, the little details that make us who we are. He sounds like a down-to-earth guy, especially after hearing what his plans are now.

I’ve had ‘The Career.’ What I would like for the next ten years is to have ‘The Life.’ Because I’ve had an amazing career. It’s been wonderful, fantastic, beyond my wildest expectations. Now I want the life, a life. A relationship with someone, a family, a home. You know, all those normal things that are not part and parcel of being a rock star or celebrity or show biz or any of that stuff. It’s time for me to start living my life at this late date.

Another tidbit I learned from the article is that Billy Joel is the number three best-selling solo artist of all time, behind Garth Brooks and Elvis. Who would’a thunk?

A life spent making mistakes is more useful than a life spent doing nothing. -- George Bernard Shaw
(See all the quotes)