To where you are 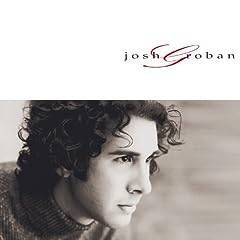 I heard a song on the radio that sounded familiar and, thinking it was from a musical, searched around for it. I discovered that it is sung by Josh Groban, a 20-year-old baritone. The lyrics were written by Linda Thompson (David Foster’s wife) and Richard Marx composed the music, wrote the arrangement and produced it. I mention David Foster because he discovered Groban and continues to manage the blossoming career.

Groban’s voice is similar to Andrea Bocelli’s, of whom I’m already a fan. I have listened to the new album and while I consider To Where You Are far superior, the rest of the songs all merit a listen.

Update: I have never seen anything on Amazon with so many reviews and 5 stars. I own the CD and love it, but it’s amazing that over 1,000 reviewers have given him a five star standing ovation.

I had an IQ test. The results came back negative.
(See all the quotes)