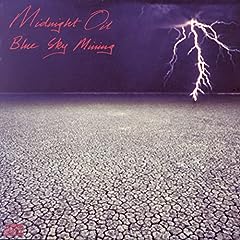 I went to a free Midnight Oil concert sponsored by a local radio station and although I’m not a big fan, I had a great time. A group called Dropline opened and were so-so. They sing Graduation Day which you might have heard on the radio, although it’s not very similar to the rest of their music.

Midnight Oil came out after a minute or two of cows mooing, over and over again. The only reason I can think of is that their new album has a cow-like figure on it. Once the mooing stopped, the band began and the crowd cheered wildly. I don’t remember all the songs they sang, but the essentials were there, like Beds are Burning and Redneck Wonderland. The lead singer’s dancing was, shall we say, unique. A less confident person would not dare dance like a possessed puppet, so I give him credit for his willingness to look foolish.

The drummer played a kick butt solo. He even started whacking a ribbed metal cylinder a few times, then returned to his drum set. He had a neverending supply of drum sticks, so he launched one or two into the crowd at the end of each song. During one song, he kept throwing one at a crash cymbal, having it bounce off (some got a lot of distance). At the end of the concert he chucked the remaining ones onto the stage. The whole night was a lot of fun, made even better with a price tag of zilch.

No one owns life. But death belongs to anyone who can pick up a frying pan. -- William S. Burroughs
(See all the quotes)